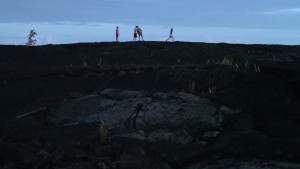 Soon after arriving, the pair becomes entangled with the neighbors: a mysterious recluse hiding out in a nearby castle and a young polyamorous “throuple” trying to dig a hole on the edge of their property.  And while the mischievous throuple offer s up an abundance of welcomed distractions for the lackadaisical James, a troubled Lexi drifts farther from the group, forcing the couple to question their own relationship and sexual dynamic.  When the problems they left behind resurface on the island, hilarity, hallucinations, murder and mayhem ensue as the group ignites a mystery that will challenge and define the virtues of everyone involved in THROUPLE, an Official Selection and award-winner at the 2016 Big Island Film Festival and Cinema Diverse, the Palm Springs LGBTQ Film Festival from first-time filmmakers Zoe Eisenberg and Philips Payson.

You can see “Throuple” digitally on iTunes & Amazon. Get the DVD on Amazon as well!